I first became aware of the South West Coast Path (SWCP) when I read an article about a couple who, following a terminal health diagnosis and financial challenges, packed up their lives and spent a few months backpacking the route. As well as being an inspiring and humbling story, it brought my attention to what is an absolutely beautiful trail and part of the world.

However, given that my geographical knowledge of the U.K. is poor to non existent, I didn’t realise til I was actually staying down in Minehead for the first time that this is where the trail begins! Result.

For my first venture I decided to walk about 12 miles to a place called Porlock Weir and set out early one morning in full dork-tastic hiking gear. There is quite a serious sculpture at the start of the path which I thought was pretty awesome and perfect for this awkward photo, taken by my mum.

The trail begins by heading upwards through the trees and skirting the edge of the coastline. After a mile or so I found myself on top of North Hill and looking out across the Bristol Channel. 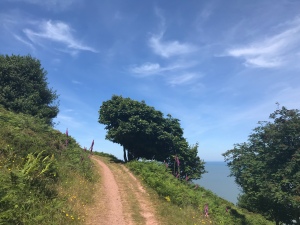 I followed the path and eventually came across a fork where you can either continue onward or take the ‘rugged coast path’ that hugs the coastline. Obviously I went rugged!

The path certainly was rugged – three miles of craggy, undulating trail with sheer drops in some places. It was lush. The beautiful weather helped, but having been back on less stunning days I can confirm it’s still pretty babestation, even without the blue skies.

Eventually the routes join up again and the path takes you down to sea level and through a really cute little village. There was a cafe, thatched roof cottages, and a farm selling fresh apple juice.

I took a small detour to head to the beach and go for a swim. 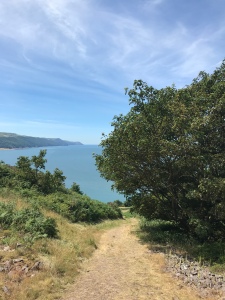 There was a sign saying not to swim, but there were a few other people and the water looked fine. Plus we just love a bit health and safety signage in the U.K. So I decided to get in – it was too hot not too!

Life still intact, I dried off and headed back to join the trail. The path continued at sea level through woodland and out onto an exposed grassy area for the final few miles. I’m sure it has a proper geographical name, but all I can say about it is that it was bloody hot.

I was really pleased to arrive into Porlock Weir and to find some shade – and a pub. The village is really sweet and as well as a pub has artisan shops, artist studios, and a small marina.

I met my mum and we shared a cream tea and had a wander about, before jumping in the car and heading home for a cold glass of wine.