At first glance, and especially if you are travelling from far afield, getting to the John Muir Trail can appear a little tricky. But once you know how, you’ll be good to go.

I’ve broken the different options down into suggestions depending on your circumstances. I’ve assumed a SoBo hike, but they can all be reversed for NoBo’s.

In a pair or group with access to two cars

If you are hiking in a pair or group and are able to drive to the trail, you can park one car at the end of the trail before heading to start in another car. The car left at the start can then be collected on the way home. You can leave your car free of charge at Curry Village near the Happy Isles Trailhead (Yosemite Valley) and at Tuolumne Meadows in the Wilderness Permit lot.

Ensure that you don’t leave anything in the car that a bear might be attracted to. Any scented items should be left in the bear lockers. Check the National Park Service website for any road closure information.

You are usually able to leave you car at Whitney Portal for the duration of the hike. Check the Inyo National Forest website for updates regarding road closures near Whitney as there are a few in operation at the moment.

If you are travelling to the trail alone by car, you can park in Yosemite and either walk or take the park shuttle to your trailhead. You can travel back from Whitney Portal to your car by public transport (see below).

If you are coming from further afield or travelling from abroad, you’re unlikely to be able to drive to and from the trail. Fortunately, there are a couple of good options, although it’s worth noting that it can take a long time. For example, I landed in L.A. at 7pm on Friday night but it took me until Tuesday lunchtime to get to Yosemite Valley (I began my hike on the Wednesday).

I could have got there a day quicker, but had to spend another night in Mammoth Lakes because the YARTS bus didn’t run on a Sunday. This worked out quite well in the end, as I had a day to do my first food shop, acclimatise a little and to rest.

Mammoth Lakes is probably the best option, as it’s the airport closest to the trail and has the best onward transport connections. Alaska Airlines runs daily flights from Los Angeles to Mammoth Lakes. It’s a pretty amazing experience in itself! I had no issue with my flight, but apparently they can be cancelled due to poor weather conditions, so you may want to give yourself an extra day’s leeway. 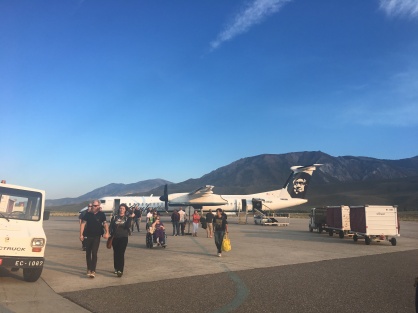 Flights to Los Angles are plentiful and are generally cheaper (at least from the U.K.) than other airports in California. I travelled to L.A. from London with budget airline Norwegian Air.

To get to Yosemite Valley from Mammoth Lakes, you can take a private shuttle (available on arrival at the airport for $20, no need to book ahead) into Mammoth. From there you can take a YARTS bus to Yosemite Valley. This costs $18 and takes around four hours, passing through Tuolumne. Make sure to check the schedule as it doesn’t run every day. It’s a good idea to book ahead, and you can do this online.

Once in Yosemite you can use the free and frequent shuttle bus to get around.

To travel back from Whitney Portal you can take a two hour bus ride from Lone Pine to Mammoth Lakes with the Eastern Sierra Transit.

I originally looked into Reno, but decided against it, as it would have meant a more expensive connecting flight to Reno from Los Angeles and I would have had to pass through Mammoth anyway. However, it is still a really viable option, and may work better from where you are coming from.

You can take an Eastern Sierra Transit bus from Reno and get off in Lee Vining or Mammoth Lakes. You can then travel by YARTS to Tuolumne or Yosemite Valley.

To get back to Reno from Lone Pine, you can take an Eastern Sierra Transit bus. This takes around six hours.

As before, make sure that you check the timetables and book ahead if possible.

Note that with both routes (and the solo car option) you’ll need to hitch a ride from Whitney Portal to Lone Pine. This should be fairly easy, but allow plenty of time and trust your instinct. If you are short on time, don’t feel comfortable hitchhiking, or have a larger group, you could arrange a shuttle.

Some people coming from in state (and even further afield) had people to drop them off and collect them. Note that you’d need to be clear on or able to communicate your end date, as you are very unlikely to have phone signal.

I did look into getting a hire car, but there is nowhere to return a car near to the trail, and it was too expensive to leave one there.

There are other international airports that you could consider. I actually decided to fly home from San Francisco (with Wow Air – so budget), as I had a lot of time to play with. However, I really don’t think it would be ideal for anyone in a hurry, as it requires more connections than L.A. or Reno and would take a lot longer. I looked at other regional airports as alternative to Mammoth Lakes (e.g. Merced) but onward connections were trickier.

You may be able to get a ride back to other areas of California. I met a lot of people who were hoping to hop in a car to places such as the Bay Area, and I was very lucky to get a ride to L.A. from the parents of a hiking buddy.